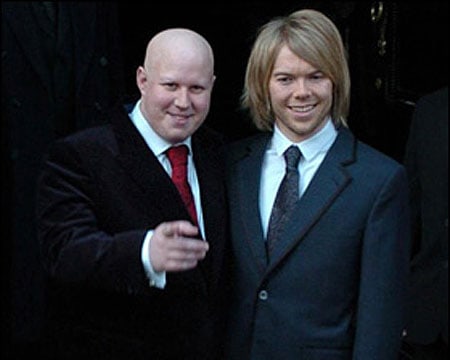 Little Britain star Matt Lucas, who entered into a civil partnership with his partner Kevin McGee in a star-studded ceremony in London in 2006. 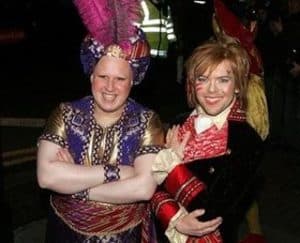 According to The Daily Mail, “TV producer McGee, 31, will be entitled to a large slice of Lucas’s fortune, which has prompted the comic to employ Mishcon de Reya, the same solicitor used by Heather
Mills in her divorce from Paul McCartney, and by Princess Diana. The reason for the split is not known, but a spokesman said it was ‘amicable’. They have not been seen in public together since they went for dinner at celebrity haunt Scott’s in Mayfair on Valentine’s Day. The couple had discussed the possibility of adopting children.”

Their reps, Mishcon de Reya and Withers LLP, released a statement: “It is with sadness that Matt and Kevin announce that their relationship has come to an end. Their separation is amicable. They ask the press to respect their privacy at this time and to exercise restraint in any reporting of this matter.”

The couple had been together for 3 years before marrying and own a £1.5m home in St John’s Wood. Lucas and McGee are the most high-profile same-sex couple to seek a divorce since civil partnerships began in the UK.

For you Little Britain fans, I’ve included a clip AFTER THE JUMP of the opening tease of a documentary that was run on BBC2 and 3 about “the real Little Britain” and citizens upon which some of the characters were based.

Previous Post: « George Takei and Brad Altman Get Marriage License in WeHo
Next Post: Heinz Deli Mayo is Perfect for all Kinds of Homes »