Ricky Holland (right), a 21-year-old British man, admitted that he headbutted one of his lesbian neighbors before his mother Violet (left) came out of the house and allegedly punched the other lesbian neighbor. Gay slurs were used during the incident, the court heard: 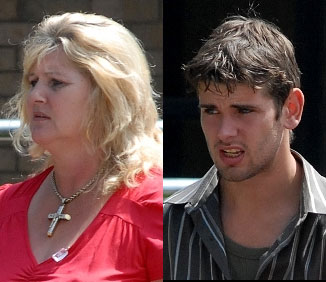 “Lincoln magistrates heard that Jennifer Warne (28) suffered homophobic abuse and was head-butted in the face by Ricky Holland outside their home in Lincoln Road, Brant Broughton, near Lincoln. And the court was told that, a few minutes later her partner Marie Neasham (34) was then punched by Violet Holland. On the first day of evidence, Lincoln magistrates were shown photographs of injuries Ms Warne sustained in the alleged attack. They were the result of a confrontation involving Ricky Holland, the court heard. He had previously been at a New Year’s Eve party at his house in Lincoln Road, but had come out into the street. Ms Warne said she had been head-butted in the face and then punched on the back of the head by Ricky Holland after he yelled homophobic insults at her. In interview with police, Ricky Holland accepted he had clashed heads with Ms Warne but said it was an accident. He also accepted shouting homophobic slurs at the couple. His mother also admitted pushing Ms Neasham, but denied assault. Ricky and Violet Holland deny assault by beating.”