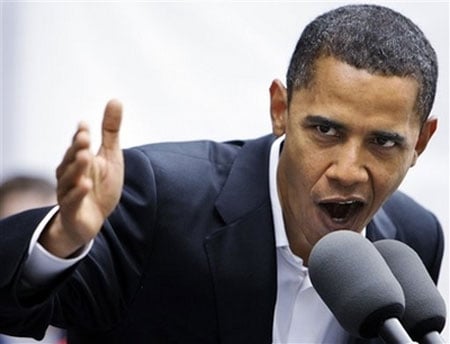 The Obama campaign released video of the candidate thanking his campaign staff in Chicago over the weekend. It’s indicative of the transparency the internet has brought and the willingness of the Obama campaign to utilize it. Watch it, AFTER THE JUMP…

Obama also released a statement regarding gay pride month as well as an open letter to the LGBT community (read it, AFTER THE JUMP)

Andrew Belonsky at Queerty did a great wrap-up of an Obama campaign conference call to gay supporters which happened late on Friday on which former HRC executive director Elizabeth Birch and current president Joe Solmonese participated, explaining Obama’s 50 state strategy and urging Clinton supporters to rally behind the party.

Obama also received the endorsement of the Human Rights Campaign over the weekend.

***OBAMA’S LETTER TO THE LGBT COMMUNITY***

I’m running for President to build an America that lives up to our founding promise of equality for all – a promise that extends to our gay brothers and sisters. It’s wrong to have millions of Americans living as second-class citizens in this nation. And I ask for your support in this election so that together we can bring about real change for all LGBT Americans.

Equality is a moral imperative. That’s why throughout my career, I have fought to eliminate discrimination against LGBT Americans. In Illinois, I cosponsored a fully inclusive bill that prohibited discrimination on the basis of both sexual orientation and gender identity, extending protection to the workplace, housing, and places of public accommodation. In the U.S. Senate, I have cosponsored bills that would equalize tax treatment for same-sex couples and provide benefits to domestic partners of federal employees. And as president, I will place the weight of my administration behind the enactment of the Matthew Shepard Act to outlaw hate crimes and a fully inclusive Employment Non- Discrimination Act to outlaw workplace discrimination on the basis of sexual orientation and gender identity.

As your President, I will use the bully pulpit to urge states to treat samesex couples with full equality in their family and adoption laws. I personally believe that civil unions represent the best way to secure that equal treatment. But I also believe that the federal government should not stand in the way of states that want to decide on their own how best to pursue equality for gay and lesbian couples -whether that means a domestic partnership, a civil union, or a civil marriage. I support the complete repeal of the Defense of Marriage Act (DOMA). Federal law should not discriminate in any way against gay and lesbian couples, which is precisely what DOMA does. I have also called for us to repeal Don’t Ask, Don’t Tell, and I have worked to improve the Uniting American Families Act so we can afford same-sex couples the same rights and obligations as married couples in our immigration system.

The next president must also address the HIV/AIDS epidemic. When it comes to prevention, we do not have to choose between values and science. While abstinence education should be part of any strategy, we also need to use common sense. We should have age-appropriate sex education that includes information about contraception. We should pass the JUSTICE Act to combat infection within our prison population. And we should lift the federal ban on needle exchange, which could dramatically reduce rates of infection among drug users. In addition, local governments can protect public health by distributing contraceptives.

We also need a president who’s willing to confront the stigma – too often tied to homophobia – that continues to surround HIV/AIDS. I confronted this stigma directly in a speech to evangelicals at Rick Warren’s Saddleback Church, and will continue to speak out as president.

That is where I stand on the major issues of the day. But having the right positions on the issues is only half the battle. The other half is to win broad support for those positions. And winning broad support will require stepping outside our comfort zone. If we want to repeal DOMA, repeal Don’t Ask, Don’t Tell, and implement fully inclusive laws outlawing hate crimes and discrimination in the workplace, we need to bring the message of LGBT equality to skeptical audiences as well as friendly ones – and that’s what I’ve done throughout my career. I brought this message of inclusiveness to all of America in my keynote address at the 2004 Democratic convention. I talked about the need to fight homophobia when I announced my candidacy for President, and I have been talking about LGBT equality to a number of groups during this campaign – from local LGBT activists to rural farmers to parishioners at Ebenezer Baptist Church in Atlanta, where Dr. Martin Luther King once preached.

Just as important, I have been listening to what all Americans have to say. I will never compromise on my commitment to equal rights for all LGBT Americans. But neither will I close my ears to the voices of those who still need to be convinced. That is the work we must do to move forward together. It is difficult. It is challenging. And it is necessary.

Americans are yearning for leadership that can empower us to reach for what we know is possible. I believe that we can achieve the goal of full equality for the millions of LGBT people in this country. To do that, we need leadership that can appeal to the best parts of the human spirit. Join with me, and I will provide that leadership. Together, we will achieve real equality for all Americans, gay and straight alike.