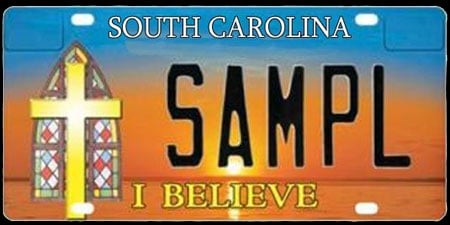 Via Raw Story: “South Carolina’s lieutenant governor announced Thursday that he is willing to put up $4,000 of his own money so his state can become the first in the nation to issue “I Believe” license plates with the image of a cross and a stained glass window. The legislation allowing the plates was one of several religious-themed bills to became laws in the closing days of the state’s legislative session. The bills mean South Carolinians attending local government meetings could soon see the Ten Commandments and the Lord’s Prayer posted on walls, pray without fear of being sued and drive home in cars with the “I Believe” plates. Civil rights groups are considering lawsuits.”

In other unsavory, South Carolina news, the state is apparently trying to figure out legal ways to ban gay-straight alliances.

And of course, the tragic news earlier this week of the lenient sentence leveled against gay bashing killer Stephen Moller.