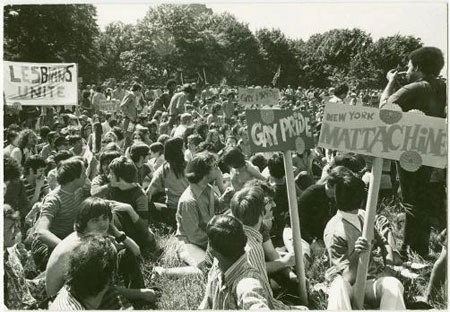 The first march went from Washington Place in Greenvich Village up Sixth Avenue to Central Park where there was a “Gay-In”. The photo above, of the Central Park event, is from the New York Public Library’s digital archive. They posted it the other day along with and excerpt from Dudley Clendinen and Adam Nagourney’s book Out for Good: The Struggle to Build a Gay Rights Movement in America, which talked about the “Gay-In”:

“Many of the men and women who marched that day would forever remember that moment on top of the bluff. Before them lay a field of uncut grass, a blizzard of banners, dancing, pot-smoking, singing and music, a huge American flag, ‘gay pride’ signs decorated with the Day-Glo hippie flower stickers, and men and women applauding each new arrival over the hill. And behind them—stretching out as far as they could see—was line after line after line of homosexuals and their supporters, at least fifteen blocks worth, by the count of the New York Times, which found the turnout notable enough to report it on the front page of the next day’s paper. No one had ever seen so many homosexuals in one place before. On top of the bluff, many of these men and women, who had grown up isolated and alone, stood in silence and cried.”

The New York Public Library has links to more photos from that day, June 28, 1970.

I’ve posted a must-watch clip from the New York Lesbian, Gay, Bisexual and Transgender Community Center with footage from the first march, AFTER THE JUMP…