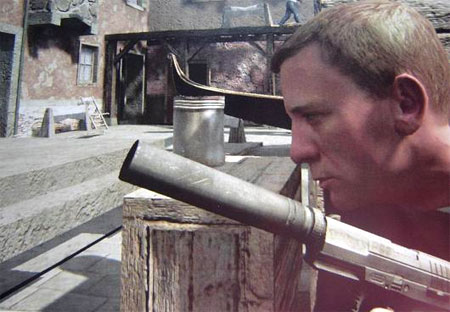 The first image from the new Quantum of Solace video game has been released and I’m impressed by the likeness they’ve created of Daniel Craig. Word is that, as a gamer himself, “Craig is even acting as quality assurance, keeping an eye on his likeness and the progress of development.”

Since the game, thought titled after his second flick, will also cover the action of Casino Royale, let’s hope that Craig doesn’t leave out the most famous shot of all.

Previously
Daniel Craig: Gays on Board with New Bond [tr]