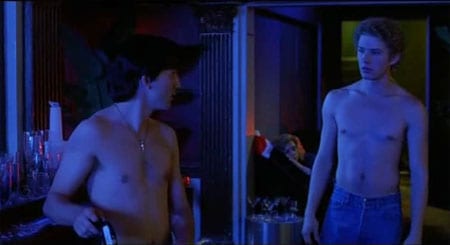 Popnography reports that a director’s cut of Mark Christopher’s 54 was “secretly” screened at L.A.’s Outfest on Friday and it’s apparently revelatory: 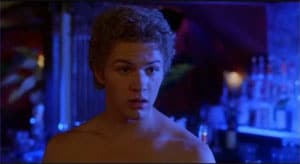 “In 45 minutes of new (original, that is) footage assembled by Christopher — using largely uncorrected, rough audio and video that was expertly edited — we see Shane sleep with dozens of men and women, for career advancement or simply pleasure. Phillippe is in nearly every scene, and his performance is strong, sympathetic and seductive. It’s also frequently nude, or barely dressed, and the camera clings to what one character calls his “body by David and face by Botticelli.” And far from being merely a “love triangle,” the slow, simmering sexual attraction among Phillippe, Meyer and Hayek — especially an amazingly intense, evocative kiss between the two men towards the end of the film — is equally as important as the queer family they make for themselves. Even Mike Myers — whose role as 54 owner Steve Rubell was widely touted as his brave bid to be taken seriously as a dramatic actor — benefits from the re-cut. The ’98 version made him a caricature, a wise-cracking, ass-grabbing dirty old gay whose eyes were always bigger than his mouth. He’s more creepy in this take, but also more empathetic, more tragically addicted to the beauty of youth no matter the cost.”

Can anyone who happened to catch it on Friday second that?

A Phillippe-Meyer clip from 54, AFTER THE JUMP…