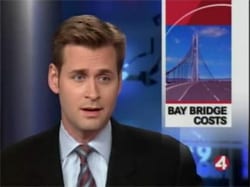 The network’s original news anchor, Jason Bellini, left to pursue other projects, prompting the network to revamp its format. We hear that the name “CBS News on LOGO” may be out the window as well, in favor of something tied in with LOGO’s 365gay news site, which it acquired in 2006.

Palombo previously reported for KCBS in Los Angeles and for a number of years was the lead reporter for KRON and KGO in San Francisco.

Check out Palombo behind the KENS San Antonio anchor desk, AFTER THE JUMP…