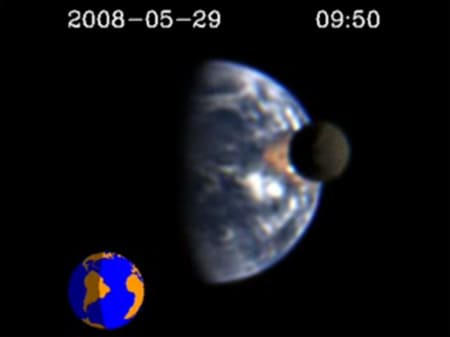 This clip is pretty mind-blowing. Earth has been photographed by the Deep Impact spacecraft and the images have been woven together by NASA to create a clip that shows the Earth as seen from deep space as the moon orbits it.

Said University of Maryland astronomer Michael A’Hearn, principal investigator for the Deep Impact extended mission, called EPOXI: “Making a video of Earth from so far away helps the search for other life-bearing planets in the Universe by giving insights into how a distant, Earth-like alien world would appear to us.”

Here’s an explanation of the clip: “During a full Earth rotation, images obtained by Deep Impact at a 15-minute cadence have been combined to make a color video. During the video, the moon enters the frame (because of its orbital motion) and transits Earth, then leaves the frame. Other spacecraft have imaged Earth and the moon from space, but Deep Impact is the first to show a transit of Earth with enough detail to see large craters on the moon and oceans and continents on Earth. ‘To image Earth in a similar fashion, an alien civilization would need technology far beyond what Earthlings can even dream of building,’ said Sara Seager, a planetary theorist at the Massachusetts Institute of Technology, Cambridge, Mass., and a co-investigator on EPOXI.”

NASA says that this will help them process the observations of worlds in other galaxies: “‘Nevertheless, planet-characterizing space telescopes under study by NASA would be able to observe an Earth twin as a single point of light — a point whose total brightness changes with time as different land masses and oceans rotate in and out of view. The video will help us connect a varying point of planetary light with underlying oceans, continents, and clouds — and finding oceans on extrasolar planets means identifying potentially habitable worlds.’ said Seager.”