Via Atomic Gay Wonk comes word that North Carolina GOP Senator Elizabeth Dole wants to change the name of an AIDS bill before the Senate, adding homophobic AIDS-enabler Jesse Helms to that of former Reps. Henry Hyde and Tom Lantos: 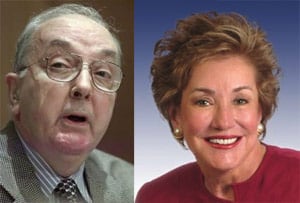 “Sen. Elizabeth Dole (R-NC) yesterday introduced an amendment that would have added the name of Jesse Helms to the title of the HIV/AIDS, Tuberculosis, and Malaria bill that is before the Senate…The name of the Act proposed in S. 2731 is “Tom Lantos and Henry J. Hyde United States Global Leadership Against HIV/AIDS, Tuberculosis, and Malaria Reauthorization Act of 2008″. The Act would be named after former Reps. Tom Lantos (D-CA-12) and Henry Hyde (R-IL-06), who worked together in their last years in Congress to achieve bipartisan support for federal funding for the fight against these diseases.”

The language was as follows: “SA 5074. Mrs. DOLE submitted an amendment intended to be proposed by her to the bill S. 2731, to authorize appropriations for fiscal years 2009 through 2013 to provide assistance to foreign countries to combat HIV/AIDS, tuberculosis, malaria, and for other purposes; which was ordered to lie on the table; as follows: On page 1, line 5, strike ‘and Henry J. Hyde” and insert ‘, Henry J. Hyde, and Jesse Helms’.”