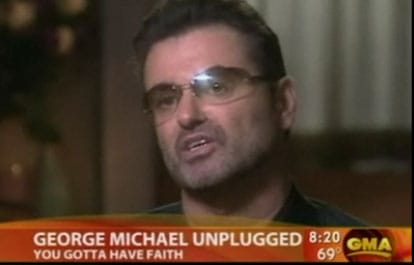 GMA aired the second part of their George Michael interview this morning. Part one here. Michael talked about living in Texas, his boyfriend Kenny Goss, and the future of his music. He also talked about his female fan base:

“What is it about me that women seem to ignore the fact that I’m gay? I think women really get the feeling that I understand them. And I grew up with two sisters. I went out with women when I was younger. I do understand them, unfortunately. And I write from the heart. I write from the place where most straight men are really a little too — there’s a little too much pride going on to write. And then it’s a pride that’s built into us as men.”

And the possibility of having kids with the boyfriend who “saved his life,” Kenny Goss:

“I’ve lived such a ridiculously free life. I think I’d be a responsible but miserable parent. I think once I decided to have a child it would have to be the most important thing in my life, and it would make me very miserable at this stage because I’m 45, and I’m very spoiled. I do look at the future and think — because I don’t have nieces and nephews, because that’s when parents get their reward – that’s what keeps them going, that’s what keeps them alive.”