“When asked in and interview with SPIEGEL when he thinks US troops should leave Iraq, Maliki responded “as soon as possible, as far as we are concerned.” He then continued: ‘US presidential candidate Barack Obama talks about 16 months. That, we think, would be the right timeframe for a withdrawal, with the possibility of slight changes.’ Maliki was careful to back away from outright support for Obama. ‘Of course, this is by no means an election endorsement. Who they choose as their president is the Americans’ business,’ he said. But then, apparently referring to Republican candidate John McCain’s more open-ended Iraq policy, Maliki said: ‘Those who operate on the premise of short time periods in Iraq today are being more realistic. Artificially prolonging the tenure of US troops in Iraq would cause problems.'” 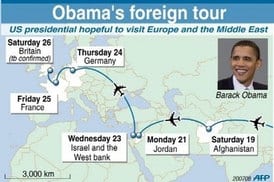 A White House employee accidentally sent an email touting the interview to its internal distribution list, according to ABC’s Jake Tapper.

After Maliki’s remarks were seized upon by the media,an al-Maliki spokesperson made a clarification: “…a spokesman for al-Maliki said his remarks ‘were misunderstood, mistranslated and not conveyed accurately.’ Government spokesman Ali al-Dabbagh said the possibility of troop withdrawal was based on the continuance of security improvements, echoing statements that the White House made Friday after a meeting between al-Maliki and U.S. President Bush.”

The clarification was reportedly prompted by a call from the White House, according to Talking Points Memo: “The gist of the White House’s explanation is that the Iraqis and Maliki specifically were simply too unsophisticated to grasp the implications of Maliki’s remarks.”

According to TPM, the NYT throws water on any notion of a mistranslation. TPM writes: “The interpreter was al Maliki’s, not Der Spiegel’s. And Der Spiegel provided the Times with a tape recording of the interview, which was then independently translated and confirmed the accuracy of the original Der Spiegel account. “

Spiegel issued a release saying that the publication “sticks to its version of the conversation.” 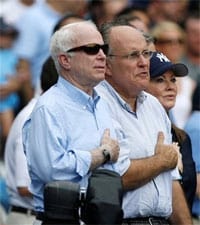 A Republican strategist to the McCain campaign (the GOP candidate appeared over the weekend at a Yankees game with Rudy Giuliani) summed up the series of events thusly: We’re fucked.

The McCain campaign responded awkwardly to the news of the al-Maliki interview:

“Today, McCain 2008 Senior Foreign Policy Advisor Randy Scheunemann issued the following statement: ‘The difference between John McCain and Barack Obama is that Barack Obama advocates an unconditional withdrawal that ignores the facts on the ground and the advice of our top military commanders. John McCain believes withdrawal must be based on conditions on the ground. Prime Minister Maliki has repeatedly affirmed the same view, and did so again today. Timing is not as important as whether we leave with victory and honor, which is of no apparent concern to Barack Obama. The fundamental truth remains that Senator McCain was right about the surge and Senator Obama was wrong. We would not be in the position to discuss a responsible withdrawal today if Senator Obama’s views had prevailed.'”

The Obama campaign took the opportunity to attack McCain’s positions on not only Iraq, but Afghanistan and Iran as well. Obama arrived in Iraq this morning: “The presumptive Democratic Party candidate discussed a number of matters with Iraqi Prime Minister Nuri al-Maliki, including the future of the U.S. military presence and the possibility of reducing troop numbers, Sawt al-Iraq news agency reported on its Arabic-language Web site.”

A recent AP report, AFTER THE JUMP…

Previous Post: « Rearview Mirror: Looking Back at the Week on Towleroad
Next Post: POLL: 75% of Americans Approve of Gays Serving in Military »