With Congressional hearings on “Don’t Ask, Don’t Tell” set to begin this coming Wednesday, a new poll reveals Americans approve in greater numbers than ever before of gays and lesbians serving openly in the military. The number is up from 62% in early 2001 and 44% in 1993, according to a new Washington Post-ABC News poll: 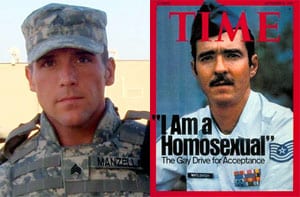 “Shortly after he took office in 1993, Clinton faced strong resistance to his campaign pledge to lift the military’s ban on allowing gay people to enlist. At that time, 67 percent of Republicans and 75 percent of conservatives opposed the idea. A majority of independents, 56 percent, and 45 percent of Democrats also opposed changing the policy. Today, Americans have become more supportive of allowing openly gay men and women to serve in the armed forces. Support from Republicans has doubled over the past 15 years, from 32 to 64 percent. More than eight in 10 Democrats and more than three-quarters of independents now support the idea, as did nearly two-thirds of self-described conservatives.”

Openness about sexuality makes a big difference for veterans:

“While 71 percent of veterans said gay people who do not declare themselves as such should be allowed to serve, that number drops sharply, to 50 percent, for those who are open about their sexuality. Non-veterans, by contrast, are as likely to support those who ‘tell’ as those who do not.”

And the religious vote:

“Fifty-seven percent of white evangelical Protestants now support allowing openly gay service members in the military, compared with 82 percent of white Catholics and 80 percent of those with no declared religious affiliation. Three-quarters of both married and single people support the idea, both significantly higher than in 1993.”