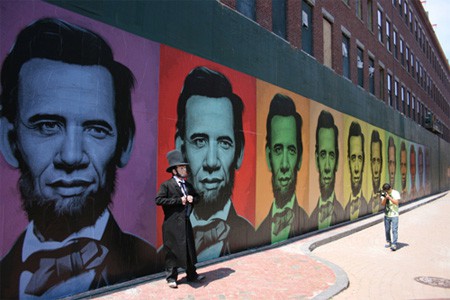 A show called “a politic” opened over the holiday weekend at Gallery XIV in Boston. Accompanying it was a legally-posted Warholized billboard installation of Ron English’s “Obama-Lincoln” fusion portrait. Given its prismatic tints, it’s a shame it wasn’t up for gay pride.

UPDATE: The enthusiasm of English fans, who have pasted the image all around the city, has caused a major stink among local businesses and residents.

AnimalNewYork has a slide show of the installation, and you can check out a video
AFTER THE JUMP…