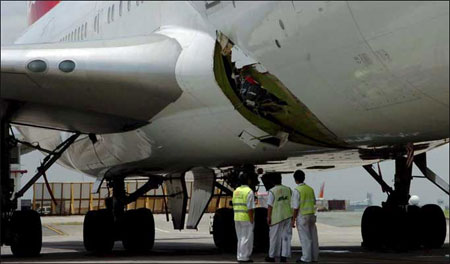 Passengers on a Qantas flight from London to Melbourne had a scare last night when a massive hole appeared in the belly of the plane shortly after leaving a stop in Hong Kong. The plane then depressurized and plummeted 15,000 feet before the pilot landed it safely in Manila.

Said one passenger: “There was a terrific boom and bits of wood and debris just flew forward into first (class) and the oxygen masks dropped down. On the left-hand side, just forward of the wing, there’s a gaping hole from the wing to the underbody. It’s about two metres by four metres and there’s baggage hanging out, so you assume that there’s a few bags that may have gone missing. It was absolutely terrifying, but I have to say everyone was very calm.”

NOTE: Thankfully nobody was hurt on the Qantas flight. I know I don’t normally post this kind of item, but I’ve been receiving quite a few emails recently as to the resolution of the problem I had earlier in the month with Jet Blue. My luggage has not yet been found, and will likely never be recovered. I’m in the process of making a claim. A bad situation, but at least it wasn’t accompanied by the terror these souls had to go through.

Clip of the Qantas jet, AFTER THE JUMP…