UK teen fights for his life after anti-gay attack: “Michael Causer, 19, was battered on Friday morning in Tarbock Road, Huyton, as he walked home after a night out. Today police described the attack as a hate crime. Locals said Mr Causer was never involved in trouble or fighting. One friend told the ECHO: ‘Michael is just a tiny lad really. He’s not very big at all. He wouldn’t hurt a fly. He’s a little sweetheart. I can’t believe this has happened to him. Everybody’s thoughts are with his family. I can’t believe Michael has been attacked because of his sexuality. It’s disgusting.’ Friends said Mr Causer lived with his parents in Whiston and has two sisters and an older brother. Residents said he was delighted after getting a job at a hairdressing salon.” 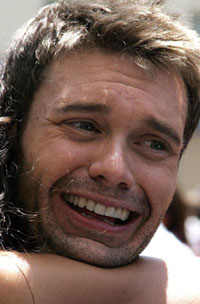 Ryan Seacrest attacked by a shark!

Those of you attending Stockholm EuroPride in Sweden may want to check out this concert on August 1 conducted by New York’s Jonathan Sheffer with several guest opera singers. We hear John Cameron Mitchell is also in town for a performance of Hedwig Wednesday night.

WordPerfect creator Bruce Bastian writes $1 million check to fight Proposition 8 at San Francisco HRC dinner: “Supporters of the effort to ban same-sex marriage already have taken in more than $1.2 million from out-of-state contributors for the fall campaign. And even before Bastian, a co-founder of the WordPerfect software company, opened his checkbook, gay and lesbian rights groups and their supporters from around the country had put more than $1.3 million into the fight against the ballot initiative.” 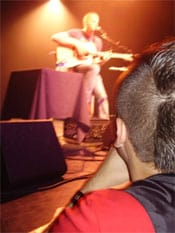 Obama supporter’s car keyed: “The words ‘white power’ and ‘I’m gay’ were etched into the car of Karen Wastradowski last Saturday. Wastradowski had left her car in the driveway of her home when the vandals struck. She filed a report with Vancouver police. Wastradowski said a blue “Elect Obama” sign in her yard could have caused the crime.”

Howl: James Franco to play beat poet Allen Ginsburg. “I’ve certainly read ‘Howl.’ I was very into the beatniks when I was in high school, and I still am. So I certainly have read Howl many times.” 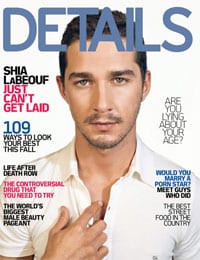 AfterElton calls out science fiction author Orson Scott Card (Ender’s Game) for a homophobic essay in the Mormon Times: “In this essay alone, he calls us liars, says that we have ‘sex-role dysfunctions,’ and that we’re ‘tragic genetic mix-ups’ (even as he indicates elsewhere in the essay that humans have an absolutely unalterable ‘long mammalian tradition of heterosexuality’). Previously, in a long history of anti-gay screeds, Card has said he supports anti-sodomy laws that would criminalize same-sex behavior (though he grants that we shouldn’t all be thrown in prison and labeled sex offenders — just enough of us to set an example so that we all go into hiding, living lonely, miserable, fearful lives).”

Show us the proof.

Canadian court claims Nigerian asylum seeker “cooked up” story that he’s gay to obtain refugee status: “According to court documents, the man mixed up the names of gay bars he claimed to frequent in Winnipeg, called no witnesses to support his claim, and although he joined the gay lobby group EGALE, he could not describe that organization’s function and was therefore accused by the board of only joining up to bolster his claim.”