Back in January, Obama got some attention when he revealed how much he loved HBO’s The Wire, and that his favorite character was Omar: 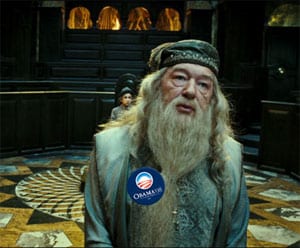 “I gotta say Omar’s a great character. That’s not an endorsement. That is not an endorsement. He is not my favorite person. But he’s a fascinating character. He’s this gay gangster who only robs drug dealers, and then gives back. You know, he’s sort of a Robin Hood. And he’s the toughest, baddest guy on this show, but he’s gay, you know. And it’s really interesting. It’s a fascinating character.”

Now, in a new interview about his kids, Obama reveals his fondness for another gay character, though this time around he’s not so open to talking about the character’s sexuality:

“His favorite Harry Potter character may be Dumbledore (he won’t comment when it’s mentioned that the headmaster of Hogwarts may be gay.)”