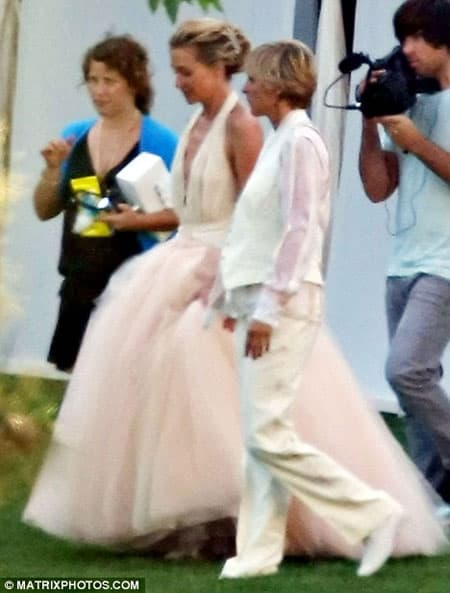 The Daily Mail reports that the ceremony was attended by fewer than 20: “Former comic and sitcom star DeGeneres wore a loose-fitting white chiffon shirt, white waistcoat and trousers while de Rossi wore a cream and pale pink halterneck dress by designer Zac Posen. The couple have been dating since December 2004 and DeGeneres announced her plans to wed her lover on her chat show in May.”

In late June, De Rossi was seen wearing a ring consisting of a marquis cut diamond set with pink diamonds and DeGeneres told People: “Yes, we have set a wedding date…Planning a wedding is very stressful. It is crazy. My gardener is now invited…I can’t wait to be married. I feel like it is long overdue. And I think someday people will look back on this like women not having the right to vote and segregation and anything else that seems ridiculous like we all don’t have the same rights.”