Moments ago we spoke with San Francisco Mayor Gavin Newsom at the LGBT Caucus at the Democratic National Convention in Denver.

We’re sad to report on the death of Del Martin, who, with Phyllis Lyon, became the first same-sex couple to be married in the state of California, both in 2004 and again in 2008. Martin was 87. Newsom married the couple.

Newsom gave an exclusive interview to Towleroad following his remarks. You can watch it above. 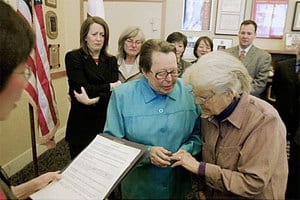 A choked up Newsom also commented on the death of civil rights hero Del Martin from the podium. Said Newsom: "[She was someone who] defined, love, devotion, and constancy. She defined, from my perspective, what marriage is supposed to be about."

Added Newsom, regarding their decision to marry Del and Phyllis in 2004: "We decided to put a human face on the issue. We called Phyllis and Del and asked if they could be that human face so we could bring that suit. We actually started the marriage ceremony before 9am because that’s when the courts were going to open. We proceeded to marry some other couples. The next day we woke up and the headlines were, "The world is coming to an end."…It went on like that for a day or two. They filed another restraining order. The judge said ‘you filled out the forms incorrectly,’ so we had a whole day to say ‘I DO’ and we did. We had no idea. It was just Phyllis and Del that morning, and we had no idea what it would start. To do nothing more extraordinary than Britney Spears did at her first marriage in Las Vegas. We ultimately were stopped by the California Supreme Court. But we were not deterred and we were committed to what we saw as the challenge of our lifetime…[This year] we thought again to call Del Martin and Phyllis Lyon to again be the face of our movement. What a gift. At a time, I didn’t even imagine. Right at this moment, as I speak to you. I get it. We had the gift of a lifetime, and that was the ability to get both of them to say ‘I Do.’ Again. The question now, is are we going to afford that opportunity to thousands of other couple in the state of California? We need your help."