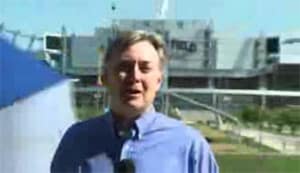 Focus on the Family producer Stewart Shepard asks the group’s followers to pray for rain during Obama’s speech at Invesco Mile High stadium during Obama’s Democratic National Convention speech. The clip was pulled by the group this morning, but it has shown up on YouTube again.

Shepard: “You might ask, now why would I pray for that? Well, I’m still pro-life, and I’m still in favor of marriage as being only between one man and one woman. And I’d like the next president who will select justices for the U.S. Supreme Court, to agree…”