Lady Gaga, the New York-based singer behind this summer’s electro-pop single “Just Dance,” talks to HX magazine this week and reveals that although she’s bisexual she’s more into her music than anything: 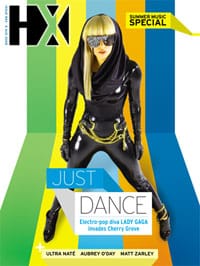 “I’m girl-crazy too. I really depends on where I am. I love men, I love women and I love sex, but I’m actually pretty introverted right now because I’m so enveloped in my work, and it’s hard to let anybody near that. People fuck with your energy, and it’s very hard to find people that are supportive of your art and don’t want to take time away from it. A lot of times, boyfriends and girlfriends get jealous and want all your attention, and I really don’t have time for that.”

She also says that Britney Spears has recorded one of her tracks:

“I was working with Rodney Jerkins on Pussycat Dolls, and we wrote this song—I almost slipped and told you the name. Thank God I caught myself; I respect her a lot, so I was to give her control over that. When we were done with the song, I was like, ‘Oh, I want to sing it,’ but my album was already closed. It never even crossed my mind that she was doing a new record. Then Rodney played it for [Britney’s manager] Larry Rudolph, who was in the studio. Rodney called me later and was like, ‘Britney’s people are freaking out about this song.”’ Ultimately, she makes the decisions, so when I found out that she loved it and was going to record it, it was amazing. I actually heard it yesterday with her on it for the first time, and I really had chills.”

Check out Lady Gaga’s performance of “Just Dance” (which she doesn’t lip sync) from last night’s So You Think You Can Dance, AFTER THE JUMP…