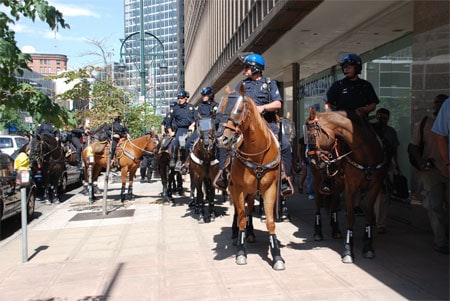 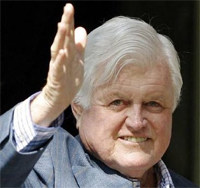 Ted Kennedy to attend convention? “In a moment that is sure to bring down the house, US Senator Edward M. Kennedy is expected to attend the Democratic National Convention, most likely to deliver a speech tonight. Kennedy has been battling brain cancer since May, and his doctors are said to be worried that his treatment has compromised his immune system and that attending the convention could put him at further risk. Still, the senator has recently told people that he has a speech written for the convention and that he badly wants to come, pending a final medical consultation. Buzz has built among Massachusetts politicos that Kennedy would come, and yesterday a Bay State Democrat close to the family confirmed that Kennedy has decided to travel to Denver, probably for an opening-night address. “

Dave Matthews and Sheryl Crow kick off Convention at Red Rocks Amphitheater concert outside Denver. Crow: “What I’m hearing from Sen. Obama is a lot like what we heard from Robert Kennedy. No matter what campaign ad we see or how it’s spun, hope is important. It’s what this country was based on. That tag that Sen. Obama’s been given (celebrity) is a campaign ploy, obviously, by the Republican party. I don’t see him hanging out. I have yet to see him at any celebrity events.”

Top photo: I shot these cops on horseback yesterday. There are mounted riot police everywhere in the city and various protests clogging the streets at any given moment during the day. It’s quite an atmosphere. I’ll be posting photos of my time here, and soon we’ll have a slideshow for you.