A new Zogby poll of 1,089 adults reveals that a majority of Americans would support an openly gay presidential candidate, according to the Victory Fund: 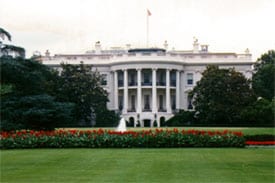 “More than six in ten U.S. voters say they could support an openly gay candidate for president of the United States, and 70% say they’d support the appointment of an openly gay cabinet secretary, according to a new nationwide poll from Zogby International…Sixty-six percent of poll respondents said they could support an openly gay vice-presidential candidate, while 69% said a gay candidate for U.S. Senate could get their vote. The poll of 1,089 adults was conducted August 13 to 15 for the Gay & Lesbian Leadership Institute (GLLI), a non-partisan leadership development organization.”

The Victory Fund adds: “More than 415 openly LGBT elected officials serve at every level of government throughout the United States, a ten-fold increase in just the last two decades. At the federal level, five openly gay or lesbian Members have served in the U.S. House of Representatives, including current Reps. Tammy Baldwin of Wisconsin and Barney Frank of Massachusetts. Both are Democrats. No openly LGBT candidate has yet been elected to the U.S. Senate.”