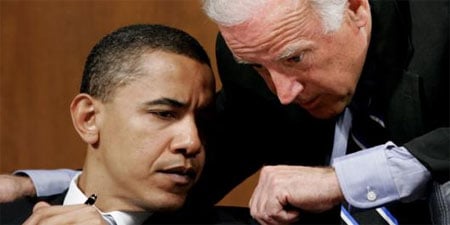 So, as you likely all know by now, early this morning Barack Obama announced Delaware Senator Joseph Biden as his running mate (my text came at 3:19 am) although by that time the AP had already leaked the pick. The text: “Barack has chosen Senator Joe Biden to be our VP nominee. Watch the first Obama-Biden rally live at 3pm ET on www.BarackObama.com. Spread the word!”

Here’s the newly launched logo that went live as soon as the text was sent.

Agence France Presse reports: “Barack Obama’s running mate, Senator Joseph Biden, 65, brings decades of national security experience to the Democratic White House ticket, an area where the presumptive nominee is seen as lacking. As charman of the Senate Foreign Relations committee, the new vice presidential nominee has met many of the leading actors on the world stage, and is an outspoken critic of the Bush administration’s foreign policy.

The Human Rights Campaign hailed the nominee. Said President Joe Solmonese: “In selecting Senator Joe Biden as his running mate, Senator Obama has chosen a proven and effective advocate for fairness and equality that our entire community can be proud of. Senator Biden’s record in the United States Senate is one of support and understanding that has been unwavering throughout his career…If the support Senator Biden has proven on our issues is any indication of the type of Vice President he will be than our community can be assured that Senator Obama has chosen a thoughtful and staunch advocate for equality as his closest adviser.”

Biden’s record on LGBT rights, AFTER THE JUMP…

McCain’s campaign almost immediately slammed the pick: “There has been no harsher critic of Barack Obama’s lack of experience than Joe Biden. Biden has denounced Barack Obama’s poor foreign policy judgment and has strongly argued in his own words what Americans are quickly realizing — that Barack Obama is not ready to be President.”

The McCain ad attacks have also already begun, focusing on Biden’s own statements against the presumptive nominee:

CNN discusses what Biden might bring to the ticket. And here are some examples of Biden’s style that demonstrates his willingness to engage vocally and aggressively against his opponents, via the Huffington Post:

And his campaign attacks on Rudy Giuliani:

AFTER THE JUMP, Biden’s record on LGBT rights, via the Human Rights Campaign:

● Helms Amendment – Hate Crimes Statistics Act (February 8, 1990)
Senator Helms offered an amendment to a hate crimes statistics bill (S. AMDT. 1251 to S. 419) stating that “the homosexual movement threatens the strength and survival of the American family” and that “state sodomy laws should be enforced.” The Helms amendment failed 19-77 (Record Vote No. 12). HRC opposed this amendment. Biden also opposed it.

● Hate Crimes Sentencing Enhancement (November 4, 1993)
Senator Dianne Feinstein (D-CA) offered an amendment to the Violent Crime Control and Law Enforcement Act of 1993 (S. AMDT. 1097 to S. 1607) to increase penalties for federal crimes motivated by the victim’s sexual orientation and other characteristics. The Feinstein Amendment was the first piece of federal legislation to provide protection on the basis of sexual orientation. The amendment passed 95-4 (Record Vote No. 351). HRC supported this amendment. Biden also supported it.

● Codification of the Ban on Gays and Lesbians in the Military (September 9, 1993)
Senator Barbara Boxer (D-CA) offered an amendment to the National Defense Authorization Act of 1994 (S. AMDT. 783 to S. 1298) to prevent codification of the discriminatory “Don’t Ask, Don’t Tell” policy on lesbians and gays in the military. The amendment failed 33-63 (Record Vote No. 250). HRC supported this amendment. Biden also supported it.

● District of Columbia’s Domestic Partners Ordinance (July 27, 1993)
An amendment was offered to allow the District of Columbia to implement its ordinance allowing unmarried couples or partners to register with the D.C. government, making them eligible for group health insurance offered to D.C. government employees for a higher premium. It failed 43-55 (Record Vote No. 217). HRC supported this amendment. Biden also supported it.

● Federal Marriage Amendment (July 14, 2004)
The Federal Marriage Amendment (S.J. Res 40), introduced in the Senate by Senator Wayne Allard (R-CO), would have enshrined discrimination into the U.S. Constitution by defining marriage as the union between one man and one woman and prohibiting federal and state laws from conferring same-sex couples with marital status and “the legal incidents thereof,” thereby endangering civil unions and domestic partnership benefits. The amendment needed a two-thirds majority (67) to be passed in the Senate and a three-fifths majority (60) to proceed to a vote on the amendment (cloture). The cloture motion failed 48-50 (Record Vote No. 155). HRC opposed this cloture motion. Biden also opposed it.

● Federal Marriage Amendment (June 7, 2006)
The Marriage Protection Amendment (formerly called the Federal Marriage Amendment) (S.J. Res. 1) would have enshrined discrimination into the U.S. Constitution by defining marriage as the union between one man and one woman and prohibiting federal and state laws from conferring same-sex couples with marital status and “the legal incidents thereof.” The amendment would thereby endanger civil unions and domestic partnership benefits. The amendment failed by a vote of 49-48, falling 11 votes short of the 60 necessary to invoke cloture, a procedural motion to advance to a vote on the substance of the bill (Record Vote No. 163). The amendment would have needed 67 votes (two-thirds majority) to pass. HRC opposed this amendment. Biden also opposed it.