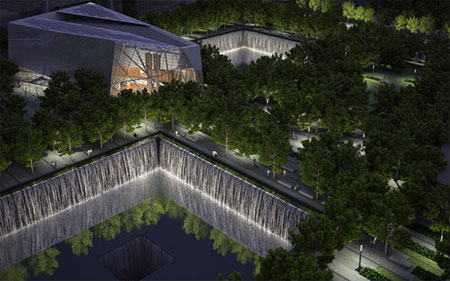 Today, of course, is a day we will all remember for the rest of our lives. 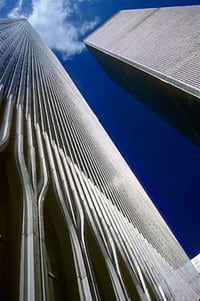 The plans for the museum that will occupy the site of the 9/11 memorial were unveiled yesterday. Its centerpiece will be two 90-ft trident structural elements that survived the twin towers’ collapse in 2001:

“‘The two tridents placed side by side will create an immediate visual reference to the distinctive ‘Gothic arch’ motif of the twin towers,’ [design firm] Snohetta said in a statement of its architectural intentions, ‘and, in their re-erection at the site, will convey strength, fortitude, resilience, survival and hope.’ The pavilion will serve as the entrance to the subterranean exhibition galleries of the National September 11 Memorial and Museum at the World Trade Center. As the only part of the museum that is above ground, the pavilion will be highly visible from the surrounding streets and from the landscaped memorial plaza and pools that will wrap around it on three sides…In the northwest corner will be an atrium, running the height of the building and enclosed in an angular framework of glass and steel. This will house the tridents, which are currently stored in a hangar at Kennedy International Airport, and allow them to be seen from within the museum and from around the plaza — especially after dark, when they will be illuminated. ‘When they’re lit at night, they will guard the site,’ Ms. Greenwald said. ‘They’re like sentries.'” 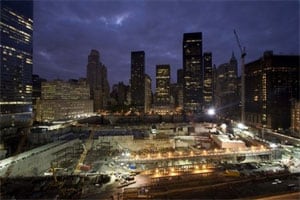 Barack Obama released the following statement in remembrance of this seventh anniversary:

“Today, we honor the memory of the lives that were lost on September 11, 2001, and grieve with the families and friends who lost someone they loved in New York City, at the Pentagon, and in Shanksville, Pennsylvania. We will never forget those who died. We will always remember the extraordinary efforts of our firefighters, police and emergency responders, and those who sacrificed their own lives on Flight 93 to protect their fellow Americans. And we give thanks for the Americans defending us every day in our communities at home, and in our military abroad. On 9/11, Americans across our great country came together to stand with the families of the victims, to donate blood, to give to charity, and to say a prayer for our country. Let us renew that spirit of service and that sense of common purpose. Let us remember that the terrorists responsible for 9/11 are still at large, and must be brought to justice. Let us resolve to defeat terrorist networks, defend the American homeland, stand up for the enduring American values that we cherish, and seek a new birth of freedom at home and around the world.”

I wasn’t able to find one on McCain’s site but if anyone can, please send it along.

The two candidates will pay their respects at Ground Zero today and then participate in a forum on public service this evening, in separate conversations with managing editor of Time magazine Richard Stengel.

In other news, the Bush White House has apparently changed its tune about who the “mastermind” was behind 9/11.

In September 2006, former Bush spokesman Tony Snow stated that bin Laden was the mastermind. Just one more push by the Bush administration to rewrite their failed history.

Keith Olbermann made a searing commentary about the leaders in our country who have hijacked 9/11.