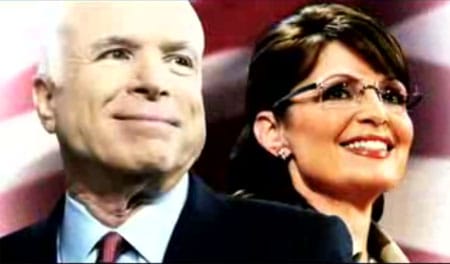 As the AP wonders if the McCain-Palin campaign is becoming Palin-McCain, the campaign has a brand new ad out touting McCain and Palin as the “original mavericks”. The ad contains a big fat lie about Palin’s record.

In a blistering essay in Saturday’s New York Times, Frank Rich writes: “We still don’t know a lot about Palin except that she’s better at delivering a speech than McCain and that she defends her own pregnant daughter’s right to privacy even as she would have the government intrude to police the reproductive choices of all other women. Most of the rest of the biography supplied by her and the McCain camp is fiction.”

And more on Sarah Palin’s deafening silence with the press (see our earlier post on this):

TPM: “[McCain campaign manager Rick] Davis says Palin won’t give any interviews until she feels ‘comfortable’ giving one. And this morning he added that she wouldn’t give any ‘until the point in time when she’ll be treated with respect and deference.'”

In July, McCain promised Larry King that his VP pick would appear on his show. Said McCain: “I want to say that that vice presidential candidate will be on your show. I will not risk the wrath of Larry King. I want to assure you.”

And Palin’s not only stalling with the press. Alaska’s largest newspaper wants her to stop stonewalling on the Troopergate scandal. A short documentary on that is right here:

Watch McCain-Palin’s new ad I mentioned earlier, AFTER THE JUMP…