Brad Pitt has donated $100,000 to fight Proposition 8, the November ballot measure that would ban same-sex marriage in California by declaring marriage between a man and a woman. 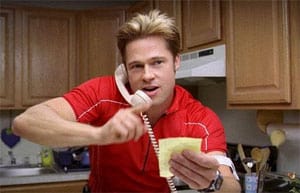 Said Pitt in a statement: “Because no one has the right to deny another their life, even though they disagree with it, because everyone has the right to live the life they so desire if it doesn’t harm another and because discrimination has no place in America, my vote will be for equality and against Proposition 8.”

It’s not the first time Pitt (pictured here in a scene of his recent film Burn After Reading) has made a statement in favor of marriage equality. In December 2006, he told Esquire magazine: “Angie [Jolie] and I will consider tying the knot when everyone else in the country who wants to be married is legally able.”

Pitt’s donation is the largest to the anti-Prop. 8 campaign by a major celebrity, the L.A. Times reports.