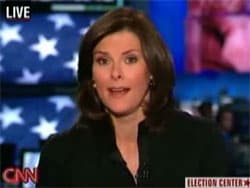 “Tonight I call on the McCain campaign to stop treating Sarah Palin like she is a delicate flower that will wilt at any moment. This woman is from Alaska for crying out loud. She is strong. She is tough. She is confident. And you claim she is ready to be one heart beat away form the presidency. If that is the case, then end this chauvinistic treatment of her now. Allow her to show her stuff. Allow her to face down those pesky reporters… Let her have a real news conference with real questions. By treating Sarah Palin different from the other candidates in this race, you are not showing her the respect she deserves. Free Sarah Palin. Free her from the chauvinistic chain you are binding her with. Sexism in this campaign must come to an end. Sarah Palin has just as much a right to be a real candidate in this race as the men do. So let her act like one.”

The press has been growing restless over the McCain campaign’s refusal to allow Palin to step in front of reporters, instead insisting on carefully choreographed one-on-one studio interviews. Yesterday, a reporter in Ohio asked McCain if his bus had become the “No Talk Express’.

Watch Campbell Brown, AFTER THE JUMP…