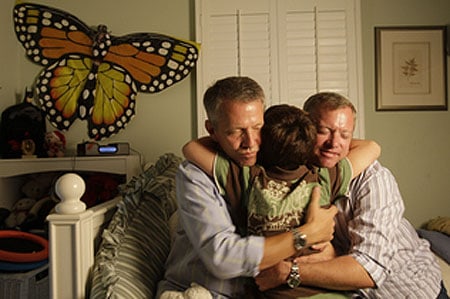 Earlier this month I posted about the Circuit Court judge in Florida who had struck down the state’s ban on gay adoption in order to allow a foster parent in Key West to adopt the son he had been raising. Here’s more from the Miami Herald on Wayne Larue Smith and partner Daniel Skahen and their 12-year-old son:

“The two men have fostered more than 30 children since DCF accepted their application nine years ago, from a 2-day-old newborn to a 17-year-old. Still, there was something missing. The little boy who had come to their home in 2001 wanted a real father, Smith said. Not a foster dad. Not a permanent guardian — a legal nicety that occurred in 2004 granting Smith the ability to make decisions on the boy’s behalf. At the doctor’s office, at the grocery store, at an airline ticket counter, the boy seemed to visibly deflate every time a stranger asked Smith, ‘Is that your son?’ Smith said. Smith and Skahen were, in most respects, model foster parents, records showed. ‘The applicant is seen as nurturing, stable and devoted,’ a social worker’s home study concluded. ‘As an individual, he is considered to hold high moral character and is known to be gentle and patient.’ The 12-year-old boy’s teacher testified the couple were among the most involved and nurturing parents in her class. ‘I must confess,’ she told a judge, ‘the first year I had him, knowing he was of gay parents, I looked for things, and I found nothing.'”

Also, check out the video here…

A gay father finds victory in his family [miami herald]