People has released some of their interview with Clay Aiken on his decision to finally tell the world he’s gay. 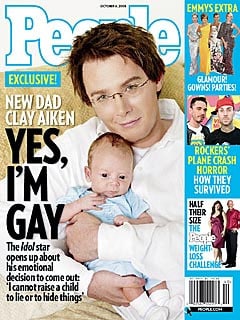 Said Aiken: “It was the first decision I made as a father. I cannot raise a child to lie or to hide things. I wasn’t raised that way, and I’m not going to raise a child to do that…[I hope my fans ] know that I’ve never intended to lie to anybody at all. … But if they leave, I don’t want them to leave hating me.”

On coming out to his family: “The born-again Christian singer also reveals how he told his mother Faye he’s gay four years ago. After dropping off his younger brother Brett, who was being deployed to Iraq, at Camp Lejeune, ‘I started crying in the car,’ Aiken remembers. ‘It was dark. I was sitting there, thinking to myself. I don’t know why I started thinking about it … I just started bawling. She made me pull over the car and it just came out.’ So what was his mom’s reaction? ‘She started crying. She was obviously somewhat stunned. But she was very supportive and very comforting.’ Even now, Aiken admits, ‘She still struggles with things quite a bit, but she’s come a long way.'”

The full issue will be released on Friday. AP’s report on the news, AFTER THE JUMP…

Previous Post: « Towleroad Guide to the Tube #359
Next Post: Paterson and Newsom to Headline NYC Fundraiser to Defeat Prop. 8 »