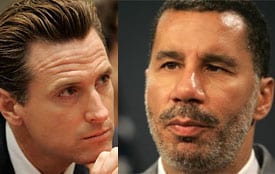 “The money raised will be used for efforts to defeat Proposal 8 (sic), the ballot initiative that would amend the California constitution to recognize only marriages between heterosexual couples. Proposal 8 was put on the ballot in response to a decision in May by the California Supreme Court, which ordered the state to begin processing marriage licenses for same-sex couples…Advocates of same-sex marriage in New York have found a loyal supporter in Mr. Paterson, who directed all state agencies earlier this year to recognize marriages between homosexual couples that were performed outside the state.” 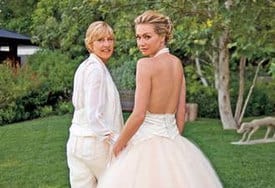 In other anti-Prop 8 news, Ellen DeGeneres posted a message on her blog urging her readers to “Vote NO” on Prop 8.

Said DeGeneres: “There’s a California Proposition on the ballot that’s a little confusing. It’s Proposition 8. It’s called, ‘The California Marriage Protection Act’ — but don’t let the name fool you. It’s not protecting anyone’s marriage. Not yours. Not mine. The wording of Prop 8 is tricky. It’s like if someone asked you, ‘You don’t want dessert, right?’ But you do want dessert so you say, ‘Yes,” which really means you don’t want dessert. And if you say, ‘No,’ which means you do want dessert — it sounds like you don’t. Either way, you don’t get what you want. See — confusing. Just like Prop. 8. So, in case I haven’t made myself clear, I’m FOR gay marriage. And in order to protect that right — please VOTE NO on Proposition 8. And now that you’re informed, spread the word. I’m begging you.”

Previous Post: « Clay Aiken on Coming Out and Being Gay: ‘It’s in the Code’
Next Post: Firefighter Testifies in San Diego Gay Pride Trial »