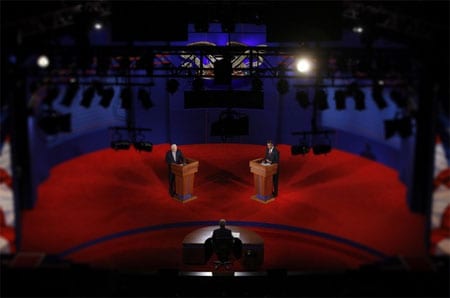 Last night, presidentical candidates Barack Obama and John McCain held their first debate at the University of Mississippi, also known as Ole Miss in Oxford, Mississippi. Here are some wrap-ups from various news organizations. Overall, Obama did favorably in mainstream polls while most pundits agreed there were no big blunders that gave one candidate an advantage over the other, and no real game changers.

Philadelphia Inquirer: “I’ll call it a tie…I bet the polls don’t change much.”

NYT Live Blog: No blunders, but no big gains.

Miami Herald: Obama engages McCain on diss of Spain. “He even said the other day that he would not meet potentially with the prime minister of Spain, because he — you know, he wasn’t sure whether they were aligned with us,” Obama said. “I mean, Spain? Spain is a NATO ally. If we can’t meet with our friends, I don’t know how we’re going to lead the world in terms of dealing with critical issues like terrorism.”

MSNBC: Longer format helps Obama. “He’s on message, hitting his talking points on the contrasts with John McCain on taxes, his plans for healthcare and energy independence. He seemed to cover more ground than McCain whose main points were about cutting government spending. For several minutes, Obama was the only one to interrupt his opponent, which seemed to be an attempt to show his willingness to fight back.”
(thanks, jesse)

Both candidates have already posted ads featuring footage from the debates. Watch them, AFTER THE JUMP…