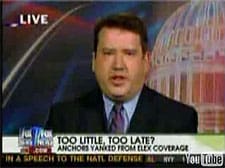 Tim Graham, Director of Media Analysis at the Media Research Center (a conservative watchdog group) shares his consternation over alleged liberal media bias with the hosts at right-wing FOX News. Not only does MSNBC employ Olbermann and Matthews, Graham bloviates — they’ve now given a show to a gay host:

“Not only is the damage already done, the damage continues. Not only are they keeping these people on during the night, they are adding this lesbian Air America Radio host, Rachel Maddow…”

Previous Post: « A Visual Tour of Wasilla, Alaska
Next Post: Where the Wild Things Are Author Maurice Sendak: ‘I’m Gay’ »