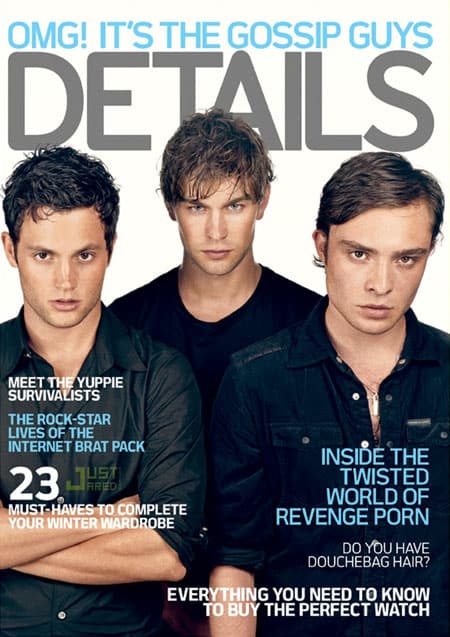 Details takes on the Gossip Girl guys this month, and the chatter is all pretty gay.

Says Chace Crawford of the “indictments” against him: “Model turned actor, dime a dozen, eye candy, doesn’t know what he’s doing … and Perez Hilton says I have ‘gayface.’ So on top of everything else, I have to overcome gayface.”

Says Badgley of Crawford: “It’s like he was genetically bred to be a teen star.”

Of his high school years, Crawford says: “I’m pretty sure I wasn’t having sex with any cougars.”

Details reports: “Most of the cast members live in adjacent downtown neighborhoods, and Chace and Ed share an apartment in Chelsea. This has fueled Internet speculation that they are secret lovers, although that seems to be a figment of the collective gaymagination. If you were a closeted TV star, after all, you’d probably come up with a better cover than living with your boyfriend in Manhattan’s Pinkberriest zip code. ‘No, sorry, I’ve got nothing to educate you about,’ says Chace, laughing. ‘What does bromance even mean?’ (Ed has denied rumors too, saying they’re just friends.) Chace’s mom helped him find the apartment, and he recruited Ed as a roommate. ‘I thought, Let’s pool our money and get something good,’ Chace says. ‘I didn’t even know if the show was going to last.'”

On Penn Badgley: “For him, acting is work—it’s how you make sure you can pay for your own car and make your rent. And if you need to shave your chest hair because teenage girls find chest hair on a good guy sexually threatening, you get out the razor. It’s a living.”

Ed Westwick responds: “‘Penn said he has to shave his chest hair because it’s threatening?’ Ed leans back, a trio of metal chains nestling in his own not inconsiderable pelt. The 21-year-old Brit stretches, grins, narrows his eyes—a kind of silent purr. ‘Reeeaallly … Well, I think Penn’s chest hair may be more like a scaahf. It actually comes out of his neck! So maybe that’s why he has to cut it. Threatening? I don’t know what threatening hair would look like. We’d have to get Penn here to see!'”

You get the idea.

You may have missed…
Ed Westwick Says He and Chace Crawford are ‘Straight as They Come’ [tr]
Chace Crawford And Ed Westwick Move as One [tr]
Latest Gossip from Gossip Girl: Chace and Ed ‘Dating’ [tr]