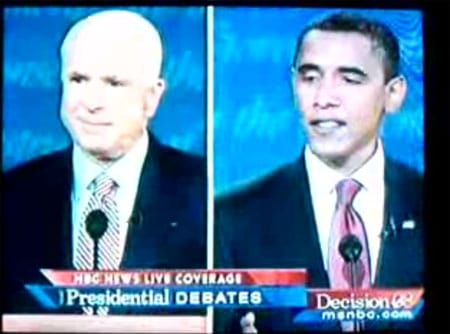 A video spread around the net over the weekend highlighting the moment during the Mississippi debate when Barack Obama mentioned that McCain said he was unsure about meeting with the president of Spain. The video’s maker claims a visibly rattled McCain utters “horsesh*t” under his breath.

I’d have to go with Andrew Sullivan’s assessment, that McCain is saying some version of “of course” although it’s still unclear exactly what he’s saying.

Which is why it’s wise not to look flustered and angry at debates while you mutter something under your breath. Or, as Al Gore knows all too well, sigh.

Previous Post: « SNL Firing on all Cylinders with Election Parodies
Next Post: Vancouver Man to Undergo Surgery After Anti-Gay Assault »