Transgender woman wins groundbreaking sex discrimination suit brought by ACLU: “A federal district court judge in Washington, D.C., ruled today that the Library of Congress discriminated against Diane Schroer when it offered her a job and then rescinded it after learning she was transgendered…Other courts that have considered the issue have said Congress only intended for the anti-discrimination statute to protect men and women, but not people who change their sex, the ACLU said.” 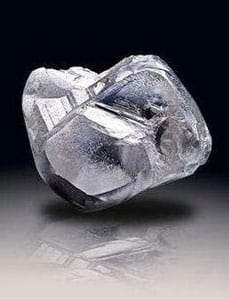 India high court sets deadline to hear arguments from government on decriminalization of homosexuality: “That the government appears to be running out of time to take a final stand on this issue also became clear on Friday when HC made it clear that it would go ahead with its verdict without reference to the stand of the Union Cabinet if it continues to sit on the issue later than the date fixed by the HC.”

Anti-gay attack at Belgrade Gay Fest: “A group of 20 or so youths, wearing surgical masks and hooded tops attacked festival participants on September 19, seriously injuring one U.S. national, who suffered a broken arm and concussion, while several participants from Serbia also received minor injuries. The police, it is added, reacted quickly, one attacker was arrested, and a number of others taken in for questioning.” 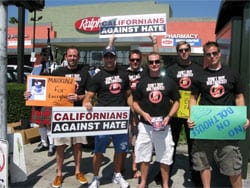 Californians Against Hate holds protest against Bolthouse Farms outside Ralph’s supermarket in L.A.: “…because of a $100,000 contribution by William Bolthouse, Jr. to the Protect Marriage – Yes on Proposition 8 Campaign. William Bolthouse’s huge financial support was one of the main reasons that this constitutional initiative qualified for the November 4th ballot. His money helped enable Protect Marriage to hire hundreds of paid professional petition circulators to collect the signatures necessary to qualify this initiative for the November ballot. If passed on November 4th, Proposition 8 would eliminate same-sex marriage in California.”

Producer David Zucker on his new right-wing comedy An American Carol and being Republican in Hollywood: “Most political comedies say both sides are bad. We’re saying, ‘F— it.’ We’re taking a side…{in Hollywood] you sort of feel like you have to hide [your conservatism]. When you meet, you give each other a secret look — ‘Are you a Republican, too?’ It’s the new gay.” 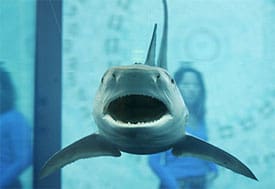 Damien Hirst paid $200 for the shark he sold last week in formaldehyde for $21 million.

Vancouver-area high school pulls course with gay content: “The elective course, which deals with issues ranging from homophobia to animal rights, has caused controversy amongst religious groups that worry it’s too malleable to the individual beliefs of teachers.”