John Barrowman wrote a straightforward piece about male sexuality in the UK’s Observer over the weekend. 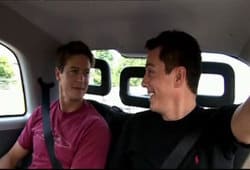 On casual sex: “The first time I saw Scott I knew he was the one. We saw each other casually for about year but before it got serious, I had my fair share of wham-bam. One can never have enough wham-bam. When a guy strays and ends up with someone else, it’s not a big deal. Sex for men is external. I think it’s hard for women to realise this.”

On British vs American: “Scott, my civil partner, is British. I think I prefer British men to American men. British men have changed over the past few years. They are beginning to take care of themselves and hell, nothing beats a foreskin. A lot of Americans are snipped at birth, Jewish or not.”

On his “type” and monogamy: “I go through phases and right now, I’m going through a builders’ (construction workers) phase. I don’t know why, but they are so hot. I think it’s OK to be in a relationship and still look. It doesn’t mean you are going to do anything. Anyway, personality is a big thing for me. Of course I look at their physique, body and face but a hot body is nothing if their personality’s bad.” 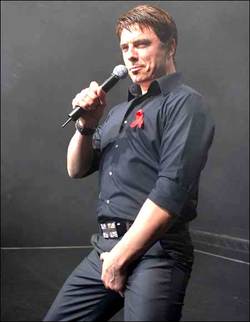 On role-playing and safe words: “Men know what men want. In and out of bed. Some women are afraid to go to regions that are especially sensitive to men because they think it’s dirty. I’d love to be able to tell women this. I think it would open up their sex lives. Experimentation is incredibly healthy. Men love it when their partner dresses up. My mother even advocates it. Unless you are going to get physically hurt, you should give it a go. Before you start, you need a panic word in case you feel uncomfortable. Ours changes depending on the situation but you can’t shout ‘stop’ because it might fit into the role-play situation a little too well.”

On gay actors in Hollywood: “Some celebrities do cash in on being gay. I have and I haven’t. Part of my success is down to my honesty in that department but I also like cars, mechanical things, and sports. I exist on that end of the gay community. Gay men aren’t all the same. I can be camp but that’s just me acting. The biggest homophobes in Hollywood are the gay guys themselves. I reckon loads of Hollywood actors are gay, we don’t know which ones. I guess the industry should be easier for gay men to succeed in, but I honestly don’t know. When a straight gay man plays a gay man they get an Oscar. I just play me. If I am looked upon as a role model for young, gay men and women then so be it. I will never be negative about my sexuality.”

What I know about men [observer]