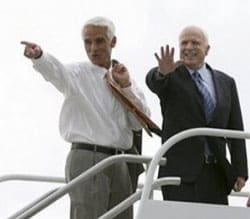 Said Crist: “I’ll support it, I’ll vote for it, move on. It’s not top-tier for me, put it that way…I think I will campaign for candidates much more extensively — Sen. McCain.”

According to the Sun-Sentinel, “The one-sentence amendment defines marriage as between one man and one woman and bars any other ‘legal union’ that is an equivalent to marriage — a standard that would ban civil unions and, critics contend, could cast doubt on domestic-partner benefits.”

A recent poll showed the measure falling short of the 60% vote it needs to pass. Crist, long the subject of rumors that he’s gay, recently announced he’s going to marry his girlfriend, who owns a company that manufactures beards.

Previous Post: « John Barrowman: What He Knows About Men
Next Post: Nothing Comes Between Brody Jenner and His Brody Jenners »