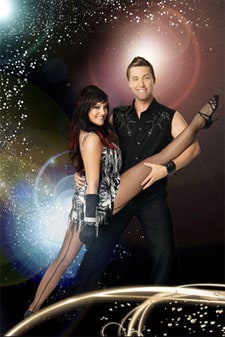 Lance Bass tells E!’s Marc Malkin that dancing with a male partner on Dancing with the Stars would have been “like making fun of something” and would have overshadowed the competition:

Says Bass: “I think it’s so important for me to do this. But my biggest concern is I just hope it doesn’t hurt the gay community in any way because, you know, we definitely can be scrutinized and picked apart. I definitely feel a responsibility of making sure I represent well.”

Malkin adds: “With countless hours now spent rehearsing—DWTS has a three-night premiere starting Sept. 22—the 29-year-old Bass is one tired puppy. His boyfriend Sebastian Leal isn’t too happy about it, because ‘he really wants to learn’ the dances, Bass says. ‘But we haven’t had time. When I go home, all I wanna do is just sleep and eat.’ Bass did, however, make sure to find the time (and the energy, for that matter) to appear on Saturday night at event producer Tom Whitman’s West Hollywood fundraiser for No on 8, a campaign to fight a November ballot that would ban same-sex marriage in California. ‘I’m definitely not political,’ Bass explains. ‘But I know what’s right and wrong, and I know that’s wrong. So I’m going to speak up about it. It’s just common sense.'”