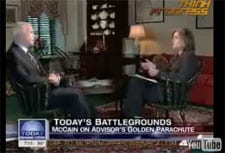 This morning on NBC, Meredith Vieira questioned John McCain about placing the blame for some of the trouble on Wall Street on CEO greed while putting Carly Fiorina at the head of his economic policy team. Fiorina walked away from Hewlett-Packard with a $45 million golden parachute severance package after being fired while 20,000 others were laid off.

McCain claims he does “not know the details” of that, and then claims Fiorina deserved it because she was a good CEO.

Fiorina, as you may know, has been largely removed from the public eye. Last week, a McCain advisor told CNN that “Carly will now disappear” after she made a statement that neither McCain nor Palin had the qualifications to run a major corporation. Fiorina also said that neither Obama nor Biden had them either.

Watch Vieira’s interview, AFTER THE JUMP…