Earlier today at a campaign stop in Norfolk, Virginia, Obama responded to the nonsense that’s been spewing from the McCain camp. 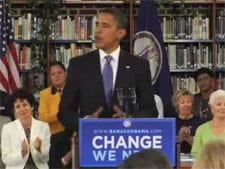 He later taped tonight’s Late Show with David Letterman and they discussed the ‘Lipstick on a Pig’ distraction. ABC’s Jake Tapper has a preview.

Said Obama: “Look this is … sort of silly season in politics –- not that there’s a non-silly season in politics. But it gets sillier, and it’s a common expression, at least in Illinois, I don’t know about New York City, I don’t know where you guys put lipstick on here. In Illinois, the expression connotes the idea that if you have a bad idea — in this case, I was talking about John McCain’s economic plans — that just calling them change, calling it something different doesn’t make it better. Hence, lipstick on a pig is still a pig.”

He added: “Keep in mind that, technically had I meant it this way –- she would be the lipstick!…The failed policies of John McCain would be the pig. I mean, just following the logic of this illogical situation.”