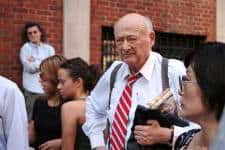 Politico’s Ben Smith asked Koch what prompted the Obama endorsement: “The designation of Palin to be vice president. She’s scary…Any time someone goes to the library and says, ‘I want to ban books,’ and the librarian says ‘no,’ and she threatens to fire them — that’s scary.”

Read Koch’s statement, AFTER THE JUMP…

I have concluded that the country is safer in the hands of Barack Obama, leader of the Democratic Party and protector of the philosophy of that party. Protecting and defending the U.S. means more than defending us from foreign attacks. It includes defending the public with respect to their civil rights, civil liberties and other needs, e.g., national health insurance, the right of abortion, the continuation of Social Security, gay rights, other rights of privacy, fair progressive taxation and a host of other needs and rights.

If the vice president were ever called on to lead the country, there is no question in my mind that the experience and demonstrated judgment of Joe Biden is superior to that of Sarah Palin. Sarah Palin is a plucky, exciting candidate, but when her record is examined, she fails miserably with respect to her views on the domestic issues that are so important to the people of the U.S., and to me. Frankly, it would scare me if she were to succeed John McCain in the presidency.