Hackers the website Wikileaks said were from the group “Anonymous” hacked into Alaska Governor Sarah Palin’s private email address around midnight Tuesday. The screenshots and some of the emails, family photos, and address book were published on the Wikileaks site and Gawker. 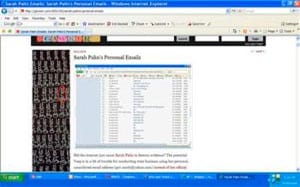 An investigation of the matter began immediately:

“This is a shocking invasion of the governor’s privacy and a violation of law. The matter has been turned over to the appropriate authorities and we hope that anyone in possession of these e-mails will destroy them,’ the McCain campaign said in a statement. The Secret Service contacted The Associated Press on Wednesday and asked for copies of the leaked e-mails, which circulated widely on the Internet. The AP did not comply. The disclosure Wednesday raises new questions about the propriety of the Palin administration’s use of nongovernment e-mail accounts to conduct state business. The practice was revealed months ago — prior to Palin’s selection as a vice presidential candidate — after political critics obtained internal e-mails documenting the practice by some aides.”

The hack, while it has been roundly condemned, has renewed questions about the Governor’s activities online.

Slate: “The Yahoo breach does raise a few questions about Palin’s e-mail habits. Why was she using Yahoo? Critics say she was taking a page from Karl Rove, who cooked up the idea of using an off-site e-mail address to confound investigations of his activities in the Bush administration.”