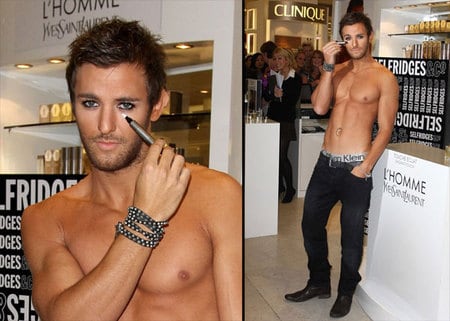 Stuart Pilkington, an actor from the UK’s Big Brother reality show, is apparently the spokesmodel for Yves Saint Laurent’s new men’s eyeliner and demonstrated it shirtless at a recent launch while his fans waited to pounce in the background.

Make Her Up reports: “Touche Eclat For Men is unfragranced and will ‘encourage men to use cosmetics as a skin enhancer, rather than to create a full make-up look’, the company claims. David Walker-Smith, director of beauty at Selfridges, which will sell the product for $45 a pop, said: ‘Men have gone from stealing beauty products from their wives and girlfriends to stocking up on their own. They no longer consider them to decrease their male bravado.'”

Wonder if they’re bringing this to the states. Maybe Pete Wentz would push it, although he’s probably coming out with a line of his own.

Or perhaps Mario Lopez, who was reportedly the talk of a recent EA Sports event for the mounds of pancake and mascara he was wearing.

Anyway, if you’d like a look at Stuart sans the guyliner, check out the video AFTER THE JUMP…

Previous Post: « Italian Comic: Pope Will Be ‘Screwed’ by Gay Devils in Hell
Next Post: In Print »