In September I posted about 27-year-old Tony Randolph Hunter, who was assaulted in Washington D.C., and died of his injuries ten days later in the hospital.

Police have now made an arrest: “Investigators say 18-year-old Robert Hanna has been arrested. He’s accused of attacking and severely beating 27-year-old Tony Hunter near 8th and N Streets NW on September 7. Police say Hunter walking to a gay bar with a companion when the attack occurred. Police say Hanna had been on the run for the last three weeks, and there had been a warrant out for his arrest.” 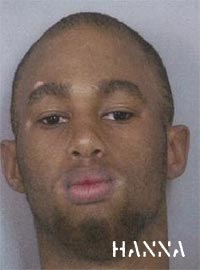 There’s also a new story: “Law enforcement sources familiar with the case say Hunter picked Hanna out of a crowd standing on the corner and said, “I know you!” Then, they say, Hunter grabbed him below the belt. According to sources, Hanna then turned and slugged Hunter three times. As the punches flew, Hunter’s companion was assaulted as well. He described it during a phone interview with FOX 5 just two weeks ago. ‘We had just gotten out of the car when four to five guys came up on us fast,’ Hunter’s companion, who asked to remain anonymous, told FOX 5. ‘They didn’t say anything– just started swinging. Some of the men attacked Tony and some came after me. I punched back and was able to get away. When I looked back down the block I saw Tony on the ground.’ Hunter’s companion never mentioned Hunter’s alleged advances. ANC Commissioner Alexander Padro told FOX 5 he finds the story hard to believe. ‘It sounds like he’s trying to set up a gay panic defense to claim he was defending himself from an undesired action on the part of the victim,’ said Padro.”

The Washington Blade reports: “…a source familiar with the case said a police affidavit expected to be filed in D.C. Superior Court later this week reportedly states that Hanna has claimed that Hunter started the altercation by touching him in a sexually suggestive way as the two crossed paths on the street. According to the source, the police affidavit reportedly says police have witnesses to back up Hanna’s version of the story and that the witnesses reportedly support Hanna’s claim that Hunter was intoxicated.”

Previous Post: « Milk Brings Back ‘a fractured moment in a troubled time and place.’
Next Post: Andy Roddick Auctions Off Nude Tennis Lesson for $15,000 »