The terms ‘bride’ and ‘groom’ will be restored as optional check boxes on California marriage forms, according to the the California Department of Health. The report suggests that the options will be available in opposite- and same-sex combinations: 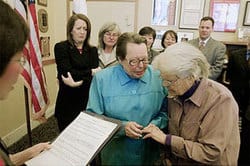 “For the last three and a half months — every since gay marriage became legal in California as the result of a state Supreme Court decision—two people getting hitched had only one option when filling out their marriage license form. One had to be identified as Party A. One had to be known as Party B.”

Said spokesperson Suanne Buggy: “Following the Supreme Court decision in May, we moved quickly to make that change to be consistent with the ruling. We’ve been hearing from a lot of average Californians that they would like to have the bride-groom option. Or they can choose ‘First person’ and ‘Second person.'”