A mistrial has been declared after the jury said it was deadlocked in a case brought by four San Diego firefighters suing the city for sexual harassment for being forced to take part in the city’s Gay Pride parade: 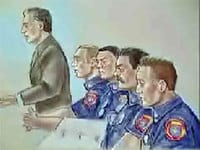 “According to lawyer Charles LiMandri, who represented the firefighters in the suit, the jury deadlocked 8-4 in favor of the firefighters on the sexual harassment claim. The jury voted 11-1 to reject the claim of one firefighter that he suffered retaliation for complaining about the parade assignment. One juror said she felt the panel could have reached a verdict on the sexual harassment claim if given more time, but City Attorney Mike Aguirre, who was defending the city in the suit, wanted the panel to declare whether it was deadlocked. “

Previous Post: « ‘Bride’ and Groom’ to Be Restored to California Marriage Forms
Next Post: Jupiter Glows in Clearest Photo Ever Shot from Earth »