Drew Barrymore tells Harper’s Bazaar that she was moved by Obama’s position on same-sex partner benefits: 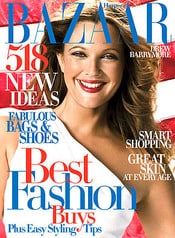 “It’s the first time I’ve really admitted I’m a Democrat. [Barack Obama]’s values are my values. For example, when I heard him speak about a gay person never having to sit outside the hospital room with their loved one sick inside, I burst into tears because so many people I care about are homosexual and it was profound to have someone be sensitive to that. That’s the kind of world I want to live in, where we’re not holding our own principles in judgment above someone or against someone.”

“…[John McCain] is a good person and he does care, but he has voted against things that are shocking as far as people’s liberties and economic choices. I study everyone’s voting record because they say one thing and do another.”

Previous Post: « ‘Terrorist!’ is all McCain has Left
Next Post: ‘Bride’ and Groom’ to Be Restored to California Marriage Forms »