Police launched a criminal investigation yesterday after independent federal candidate David Popescu told more than 200 high school students and a host of competing candidates in Sudbury, Ontario, that he felt gays should be executed in response to a question about same-sex marriage: 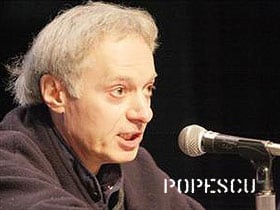 “Popescu introduced himself with a public prayer, blaming environmental damage and economic unrest on the wickedness of society. His comments were met with silence as some students grimaced and shifted in their seats. Near the end of the more than two-hour event, students were invited to ask the candidates questions. As a long line of pupils waited to speak, Popescu told a young female student who asked about stem cell research that, ‘God would hurt’ those who had an abortion. The crowd jeered and many rose to their feet in protest after Popescu answered another teenager’s question on gay marriage. During a telephone interview later in the day, Popescu reasserted his view. ‘A young man asked me what I think of homosexual marriages and I said I think homosexuals should be executed,’ he said. ‘My whole reason for running is the Bible and the Bible couldn’t be more clear on that point.’ Candidates and teachers looked on in silence as students called for him to be ‘cut off.’ Despite their outrage, the discussion moved to other topics.”