A Miami gay adoption case has begun in closed court: 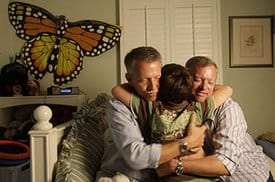 “The case is a new challenge to Florida’s 31-year-old law that allows gay people to foster children but forbids them from adopting. Miami-Dade Circuit Judge Cindy Lederman is presiding over the trial to determine whether Gill, 47, and his partner, 34, can adopt two half-brothers whom they’ve had custody of since December 2004. The boys’ mother and respective fathers lost their rights to raise the children in 2006.”

Read about their story here.